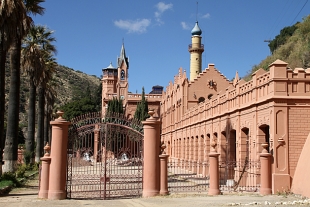 Glorieta Castle is Ridiculous … In a Good Way … Mostly

Don Francisco Argandoña and his wife Clotilde Urioste Velasco were among the most important members of late 19th Century Bolivian society. He had made a fortune in the mining industry, and owned a private bank. She was the daughter of a wealthy Spanish family, and dedicated her life to helping orphans. On a diplomatic tour Europe in 1898, they called upon Pope Leon XIII, who pronounced them the “Princes of the Glorieta”. They accepted the honor graciously; it hardly mattered that Bolivia didn’t have a monarchy.