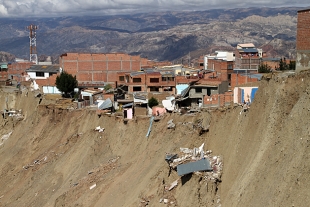 In March of 2011, while we were in Buenos Aires, we read about a mega-landslide in La Paz, which destroyed 400 homes and displaced 5000 people. But we didn’t pay attention to the name of the neighborhood. So when we decided on a whim to explore Pampahasi, found high on the eastern side of La Paz, we were stunned to find a road that simply dropped off into nothingness. Houses ripped into two and a vast cliff of mud and sand dropping precipitously to the field below.